There wasn’t much time to think about it: after an early start to the day, our next workshop in Shilpee began. This time our aim was to have the actors understand the clown well enough to perform, even once we’re gone. With that in mind, we prepared to greet the audience in character before our show. The workshop went until one, leaving us with only an hour to prepare ourselves. 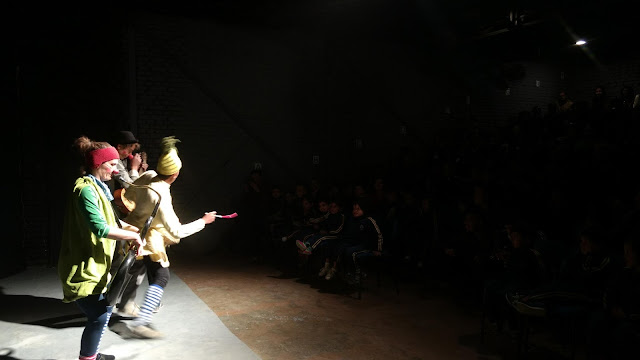 It was different in a black box. We were used to the wide open spaces of schoolyards, with goats and dogs in the background. To aeroplanes overhead, sudden gusts of wind sending our helpers scrambling to hold on to our background, to sunshine sweating the make-up off our faces. Indoors we had lighting and off stage, concentration and a time when the audience were allowed inside.

Our students did a great job playing with the arriving children – one hundred from a nearby primary school. The kids were excited by the clowns constantly appearing in new places, greetung them at the gate, waving from windows, some running into their midst and creating chaos. By the time the audience arrived in the theatre, everyone had an idea of what a clown was. 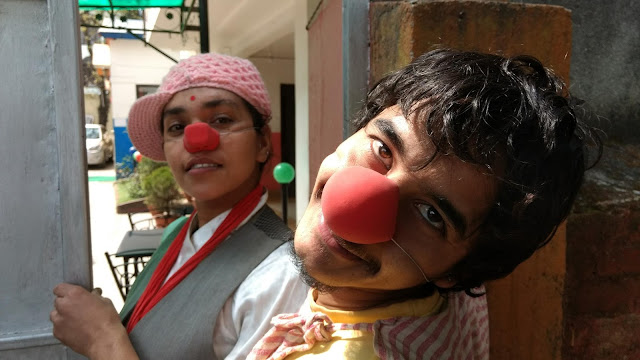 There were the peculiar sounds that are unique to our profession: the rumbling of noise as the seats are taken, the eager chatter of voices as the crowd wonders, is curious, is excited. We heard it from the back with the knowledge that it was the last time.

We began. The audience loved it, the children screaming and laughing, calling our names at the end. We fell, we foolled, we teased and sang…

And then it was over.

As suddenly as that, a year of preparation came to a close. A year of thinking, imagining, wondering if, or how, our why. Of performing, of traveling (such a great deal of traveling) and laughing. It finished to a cheerful round of applause on the Shilpee stage.

Yes, we still had two days of workshop to give, but our clown characters took a bow and left the stage in Shilpee. We shook the hands of the children, they called our names one last time, we waved and were gone.

For two more days we were busy with the workshop. All of the participants had routines to show, each of them found strong aspects of the clown characters.

They worked with an enthusiasm and concentration which amazed, especially since they had their own theatrical play to worry about every evening. As the sun rose over the smog of the city, they worked hard inside the black box of the theatre that had been our own final showcase. When they were finished, we felt that we had set the foundations to make our own work redundant one day – that there will be Nepali clowns, that can  perform for children themselves!

Thursday, our final day and our first completely free one in quite some time, arrived with good weather and mood. The dimly lit Kantipur Cafe served tea and breakfast. Outside the welder was fixing his indefinable machinery parts again. We spent the rest of the day with Yubaraj, sightseeing and talking about our experiences and whatever came into our minds.

In the evening we invited our friends to the theatre to say goodbye. It was a touching, gentle evening of talk, food and laughter. Six hours before we were due to leave Shilpee, we finally crawled into our beds.

And now, the morning has arrived, and we’re about to head to the airport. It’s a fine day, like many we’ve had. The clouds have parted to make it easy for our flight. Perhaps we’ll have a final sighting of the Himalayas.

And all of a sudden, we’ll be back in our own worlds, with work to catch up on and friends to see. The work with the clown in Nepal will remain with us for a long time, as photos, videos, text, and vivid memories. And maybe – hopefully! –  it will remain as inspiration and joy in the people we crossed path with. 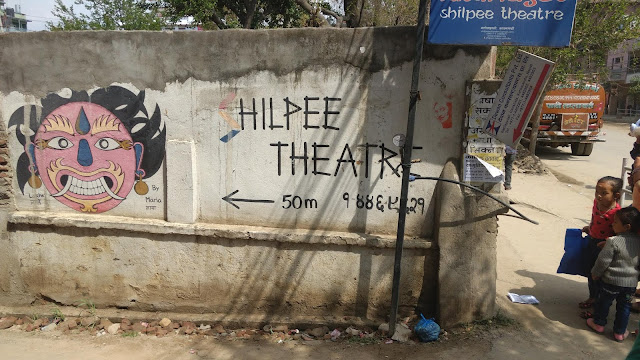 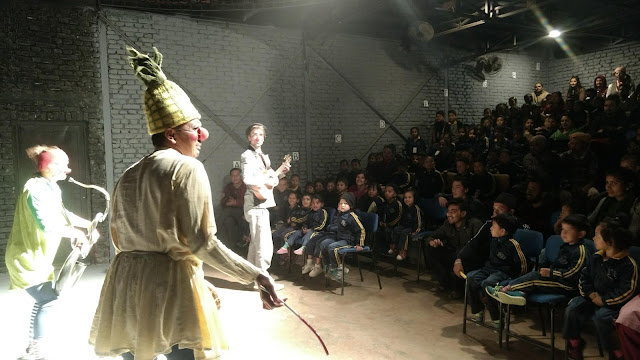