About the show. I’ve never described it, so better late than never! 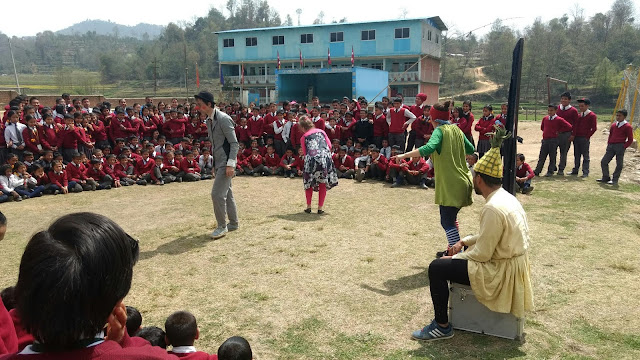 Anita Fricker comes on stage first, as bright green clown called Samosa. She tries her best to play a melody on her Serpent until she’s interrupted by Yubaraj, in yellow, named Sukha. They start arguing about what to play until I arrive from the audience as Kathmandu, dressed in grey and constantly stumbling into the audience. Finally Anita Bertolami as pink Putali comes in, playing the tune we all join into. The kids love her sheer „pinkness“ and big gleeful smile.

After an introduction, we leave the stage and Putali and Sukha bring a suitcase on stage, that Kathmandu can’t remove until a child comes and helps. This is always a beautiful scene in which a young girl gets to show her strength. 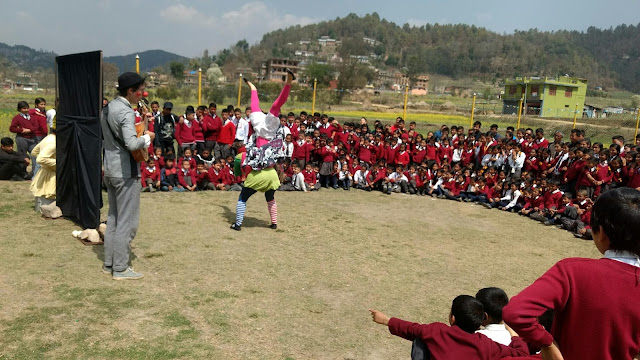 Then Sukha comes out to do some magic before a brief dispute breaks out between him and Kathmandu, which ends in a small woman, played by both the female clowns, appearing on stage. This character is a beautiful optical illusion with lots of space for the failings of the clown and plenty of laughter throughout. Soon after, Samosa creates giggles of joy as she struggles to remove the props on stage. She then magically grabs a crystal ball from bubbles Putali has blown and displays her contact juggling skills until Kathmandu steals her ball and Sukha transforms it into juggling balls.

Three balls in the air later, and an acrobatic routine by Samosa and Putali takes place, in which neither can quite agree on what they should be doing. The confusion they create between themselves is a delight to watch!

This is followed by a chase scene for the juggling bags which evolves into complete chaos with the clowns racing into the crowd, at which point the audience usually screams with joy. When things settle, all the clowns come out to sing a Nepali song together with the audience, at which point we introduce ourselves once more and wave goodbye while everyone sings cheerfully.

There is so much that happens in each scene – so many little nuances, jokes and plays with the crowd and each other, but that’s the short description, for those of you wondering. The whole thing takes around 45 minutes, with playing with the kids afterwards, it’s probably over an hour.

We’ve only another four shows left, now, before playing for World Children’s Theatre Day in Kathmandu. It’s been lovely, but today I realised for the first time, that we are coming to the end of our time here… 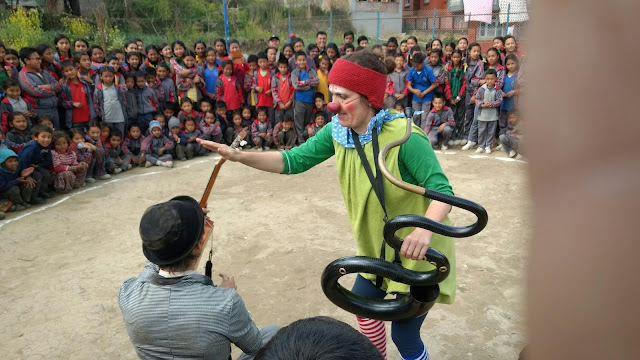 After several weeks of playing two shows a day to hundreds of children, it becomes difficult to recall which school was which. One thing I know for sure, though: there have been a lot of dusty schoolyards, and principle’s rooms with fans beating a rhythm. And happy faces, screaming children, eyes wide with joy, calling our clown names from the windows: Sukha, Samosa, Kathmandu, Putali! Like we’re fairies that you have to call into existence.

Today we headed out of Kathmandu at 8am, returning to Kabre for two school shows. Because of the examinations taking place in all of Nepal, the public schools are all closed, so we ended up in two private institutions instead, playing to around one thousand children. Both were in the lowlands of Kabre, which meant a little less driving than yesterday. In both we played in a football field (actually, we’ve always played outside, since most schools have no money for a gym or recreation room).

The children in the private schools we found to be a little more demanding, tearing at the clowns in their eagerness to have contact. They were overjoyed to have us there, but also wanted​ to own us – to pack us away in their bedrooms and have us come and perform when they need us, like a real life jack-in-the-box. 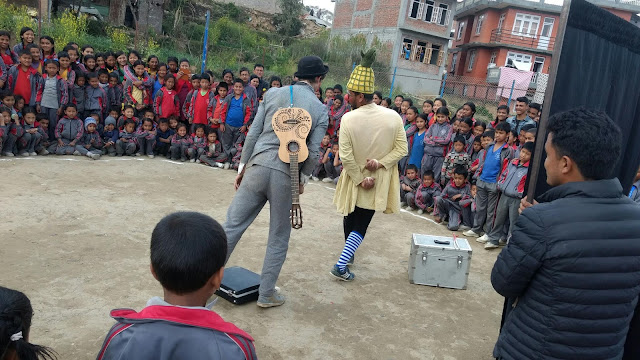 During the performances, we could see the villagers standing in the distance, not daring to enter the grounds – one principle even told us that they weren’t allowed inside. As a result, tomorrow we’ll only play for the villagers in this area! We’re all happy with our decision: One of our most memorable performances, was when we played for the villagers in Morang – it feels good to give especially the poorer people (some of whom can neither write nor read, or have the time to go to school) a chance to enjoy the show.

We headed to… searching for accommodation. Yubaraj wanted to show us a conference hotel there which costs a small fortune:  manicured trees, terraced verandas and bell boys. As we arrived, a Westerner with a bodybuilder physique watched as an elderly concierge struggled to lift the westerners massive suitcase onto his head. The bodybuilder carried his own handbag after the concierge.

„I wanted to show you that we have places like this, too,“ Yubaraj joked. Then he grew serious and added, „I stayed here once. An NGO organised a workshop with fifteen villagers and we slept here.“ I could imagine how out of place they must have been as he added, „We could just as easily have worked in Shilpee Theatre and slept in a cheap hotel, but that NGO, like many, are run by people in the West who don’t understand Nepal. For them, the price of this hotel isn’t much, but with the same money we could create theatre pieces that could be performed all the country.“

We checked into a place around the corner for 500 Nepali Rupee per room instead of the 5000 the conference hotel wanted. There was no one to carry our bags, but we haven’t been walking for hours without gaining some strength. Even if none of us looks like a bodybuilder 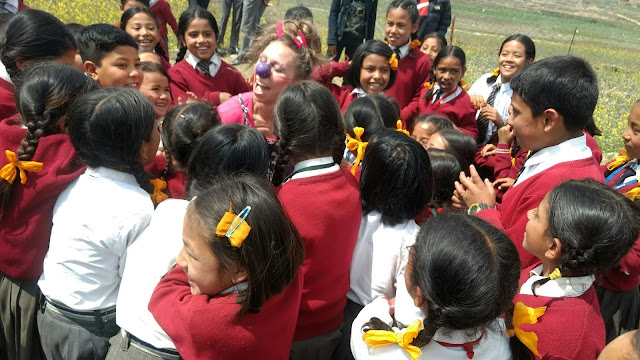 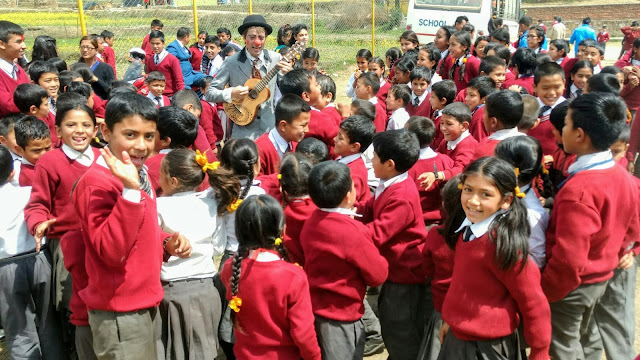