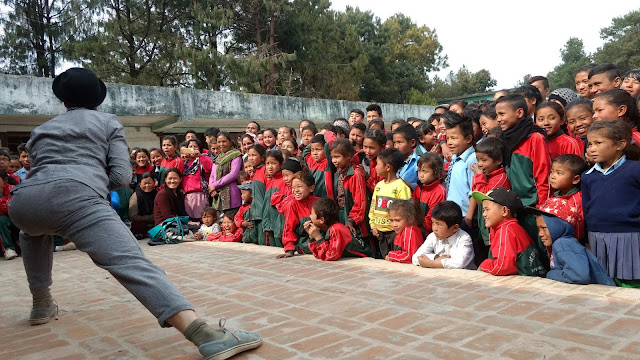 After breakfast in the village, we waited for the participants of our workshop. Yesterday they arrived an hour late, and to a greater extent, that was what happend today, too. Although the day before, some girls had come, today there were only boys. It’s a pity, since especially the girls – excruciatingly shy at times, even too embarrassed to participate in exercises – would have been good to reach.

That said, the boys came out of their shell in the workshop. We chose to teach acrobatics since we don’t really have the necessary time  to give them the theatre workshop they needed. The acrobatics gave them a new insight to their bodies, and we were doing pyramids and rolls by the time the course was over. They were all eager, good natured in their enthusiasm to learn. 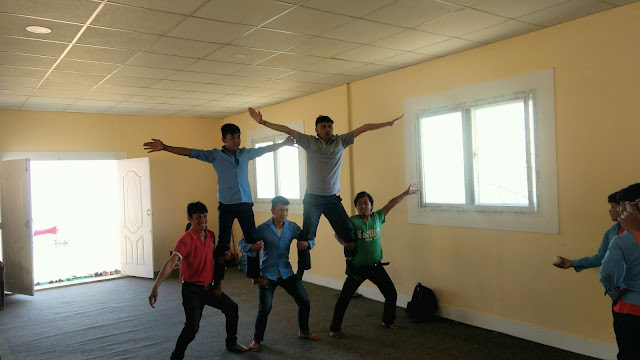 We ate lunch overlooking the hills. The sun was warm, the view far into the distance. Occasionally an eagle soared over our heads while lambs and chicks wandered blissfully at our feet. Rice and lentils are eaten here two times every day, yet, surprisingly, despite four weeks of it, we aren’t tired of the mix. There are always slight variations; in the hills there are more potatoes, the spicy salads have a different taste. The nuances come out better when the variety is limited.

The meals are always served in metal plates, designed to be indestructible, and for us foreigners, the Nepalis manage to find some spoons. Most of the people we’ve met in Nepal, eat without utensils. Yubaraj will happily lick his fingers and say, „Food eaten with your hands just tastes better.“ Today he laughed and added, „Probably because of the dirt underneath your nails.“

We performed to around fifty people in the theatre here. It was the first show ever played there – the concept of theatre is still unknown here. Even in Kathmandu we met people who didn’t know the word „theatre“. Here, where life is almost from hand to mouth, they know it even less. So it was an honour to be the ones to introduce theatre via the clown. Despite a heavy silence at the start that Anita Fricker had to valiantly fight through (she comes on stage first), they were laughing. We really hope that they will have more shows here, and I think it will give them something else, allow them to see the world and each other differently.  Theatre has the power to bring people together, and I hope it will have that chance here. 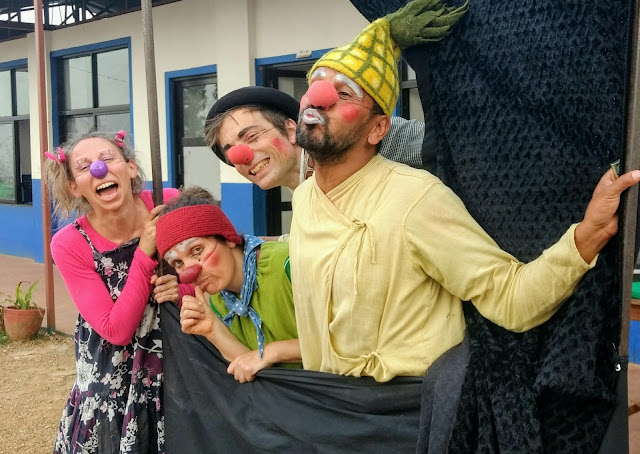 We walked an hour to the next location, a small primary school down the hill within the terraces. Here there were only fifty people, and the show was very intimidate and beautiful because of that. The children were between four and nine years old, their dark faces hardened by the climate, their arms strong, the hands rough: I could feel the work they’ve done when I touched their skin. Life on the mountains is not always easy, despite the beauty of the landscape. The teachers here were very friendly and we could see that they were kind to the kids. They laughed and enjoyed themselves as much as their students. 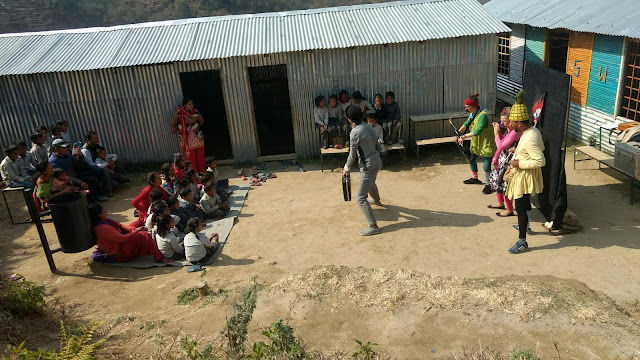 We trecked back the way we came, uphill this time with parts of the stage and still in costume. Tika guided us expertly, although his natural environment is the plains. Yubaraj, ever the workaholic, took a bus back to Kathmandu to help direct the new show in Shilpee that has premier tomorrow. He’ll be up until well past midnight, no doubt – he worries for the show and for the new students whose first play it is – and in the morning, at six, he’ll drive to join us for our next trip. How he manages to do all the things he does and be in a good mood, is one of the small wonders of Nepal. When I look at him, jumping around in his yellow clown costume, I wonder if perhaps sleep is overrated?

In the morning, Yubaraj arrived bright and a little tired, too. He’d had all of four hours sleep between the end of rehearsals at 2am and his 6am start. With him came our transportation, a four wheel drive that is the only kind of car that can survive these roads.

After deciding to take a short cut, we promptly got lost – there are no signs here, and neither maps not the internet will have all the tracks. Therefore, instead of playing where we intended, we simply got out at the first school we came across and asked if they’d like us to play. Fifteen minutes later we were performing in the middle of four hundred children in the Tapeswor High school! It was that easy. If we wanted, we could play here every day for the next five years and still not get all the schools and all the requests done. 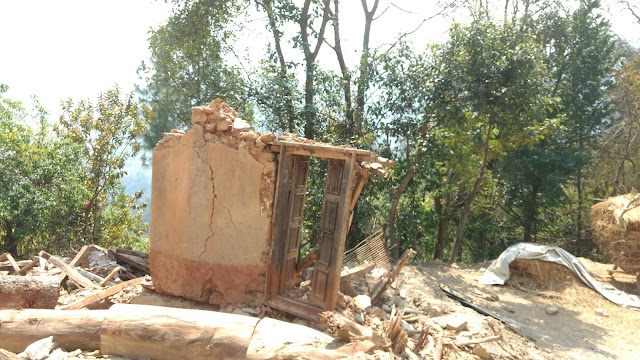 No time for the tired and delayed, so despite an overwhelming hunger, we drove onwards – I say „drove“, but it felt more like a tiny horizontal battle, so extreme were the road conditions. We past through a landscape severely affected by the earthquake – we saw many a damaged or completely destroyed building along the way. When we finally arrived at the Dedithumka secondary school, our actual destination, we hid around the corner and stuffed ourselves with snacks underneath two massive pipal trees. Then the show began to four hundred and fifty children, after which we still spent a good twenty minutes mingling with the people of the school before – finally! – having lunch.

One a side note: we have tried to play mainly for public schools (we’ve only played two private schools so far), because the conditions are worse there than in the privately run ones. Going to these out-of-the-way institutions, really feels like giving the children something they haven’t had before. 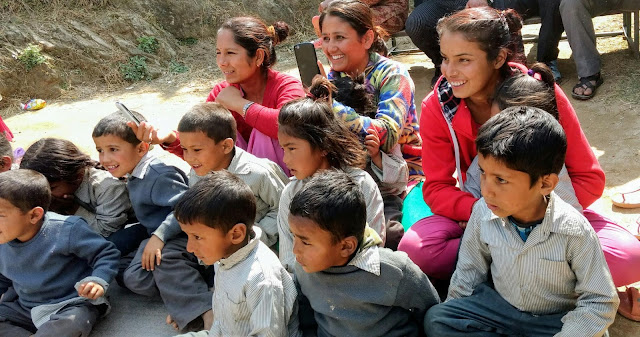 The shows over, we raced back to Kathmandu to see the premier of the Shilpee show. They’d really improved the piece – no surprise with the amount of hard work they’ve put in during the last week! It was nice to see it working so well and the actors enjoying themselves.

And that was the day: long but fulfilling, as have been all days so far. If what we do can change things for the better, then I think we’re doing good work here!

And here’s a little video of the trip: https://goo.gl/photos/j7jghCsiqzyjt8UP7 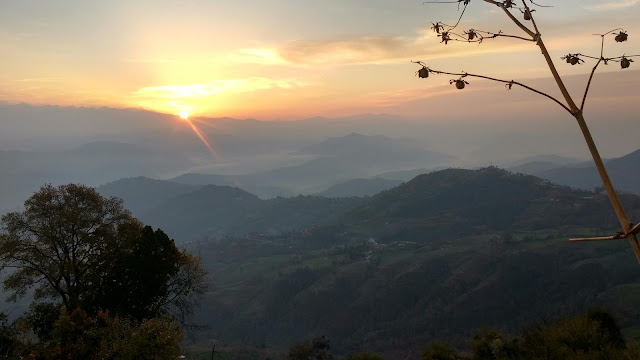