On Friday we performed for two schools for over a thousand and seven hundred children. Both shows required some driving, not being placed right next to each other like on Thursday. The second school in particular made us realise that our work was surely needed:

After arriving, we were shunted into the principles room, a bare yellow chamber lined with couches underneath a slowly spinning ceiling fan. In the middle of it, posed in a slouching position atop a chair, was the principle himself, a slovenly man merely missing a gemstone ring to be mistaken for a Lybian dictator. His legs were stretched out in front of him, his right arm at full length atop his desk. Around him, as of on display or as if awaiting an audience, sat his teachers, silently eyeing of us.

„What cast are they?“ was one of the first questions he posed to Yubaraj. In our confusion, we merely said nothing, while Yubaraj explained that we had none.

„And this thing, how do your write it? Clam?“

The director just hummed approvingly, as if Yubaraj had confirmed something to him, although I’ve no idea what that might have been. 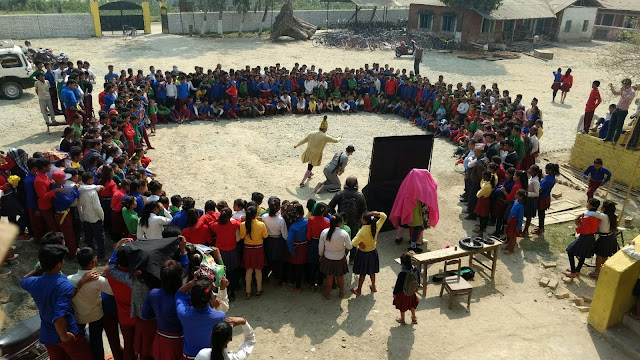 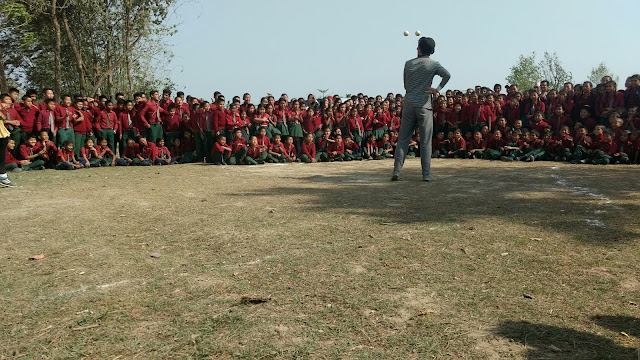 The schoolyard was directly underneath the heat of the sun, which was already 30c in the shade. The children were more scared of us yet also so much more hyperactive than any before; relishing the freedom of us. They screamed and yelled, gathered around as if we were a lifeline. This was our fourth show, and artistically, it was good to see that the rhythm of the piece was slowly falling into place. The was loads of laughter and applause. We left them in the dust of our car afterwards, them waving and running after us in joy. Only a few of the teachers had come to watch but the principle had remained absent. As we left, I hoped that our show had given the children a few moments of freedom.

The first show, too, had been amazing. With an estimated thousand children, it was the largest crowd we’d played. Yubaraj was especially nervous, since it was his old school. No need to worry though, the kids went wild for us, which might have been a bit of the wrong mood right after their 10am prayers (held in huge, multicoloured lines in the schoolyard)… but was most certainly fun for all involved.

Saturday, which is the Nepali holiday, was a school-free day, but we had a three hour workshop – the conclusion of three days of workshops – and two shows to play. 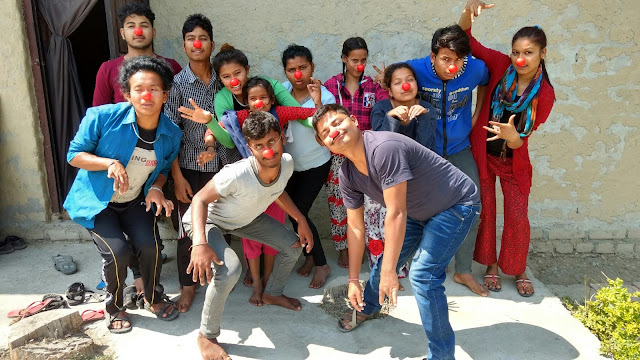 The first, in the theatre, was nerve-wracking, since it was to the students we’d taught and the theatre that Yubaraj had helped create. We could play with more subtlety than in the huge outside locations, so the laughter was more intense at times, with tiny details coming out much stronger. Halfway through, the was a power cut, and the room was left in complete darkness. But the theatre was prepared; within ten seconds the side doors were opened, spilling daylight onto the stage, and four minutes later, the emergency generator was up and running and we could continue. In fact, we never even had to pause in our play!  I suppose, in a country in which the electricity is unstable, such occurrences can be everyday. 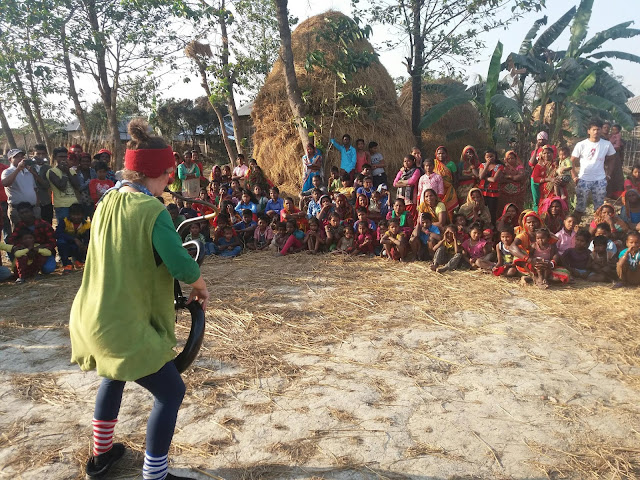 The final stop for the day was down a pitted country road. It was hardly even a dirt track at times, more a piece of field. In it was a small impoverished village, called Lakhantari. It’s dangerous to think, just because I use that word, that it was a miserable place or that the people are dirty and downcast. Yes, there were oxen being used to farm, yes there were huts that looked no better than cardboard, but the people were still gentle and friendly. Some of the men were clearly suffering from alcohol abuse, but the children and women were both curious and kind. We set up in a field, before a pile of straw, while colourful clothes and faces gathered around us. The houses around us looked much like a European history park, so many old manual tools in the middle of simplistic buildings could be seen. It was surreal to find ourselves there only two hours after playing in the theatre. 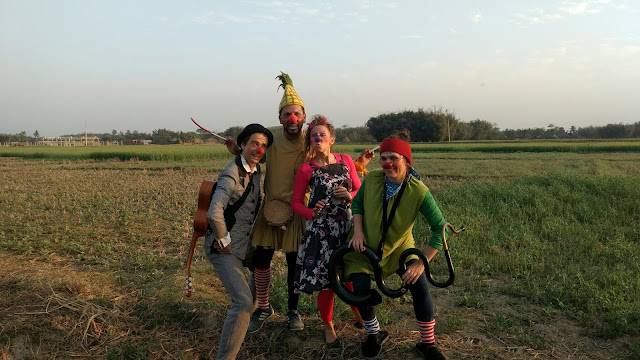 At the end show we mingled, and the children danced wildly to our music. I think it’s a moment none of us will forget.  As we stood there, seeing their smiles, I felt that I our project had been worth it – something good, however small, has come out of all our plans.

Here a link to photos of the participants of our workshop 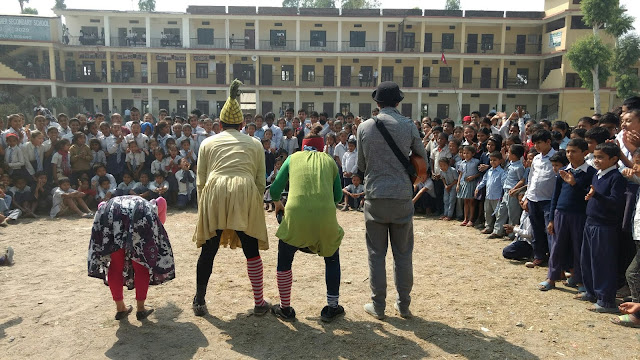 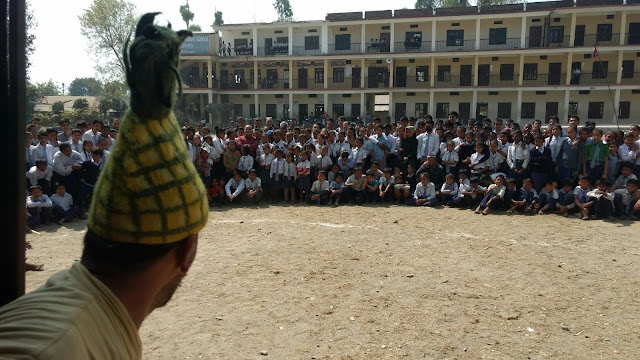